Gabrillian is born on the 17/08/12, it was a caesarean …He is born at 8 am and I got to hold him in my arms only at 5 pm, the doctors didn’t explain me anything, I was worried…Gabrillian got under various machine to open his lungs, for the jaundice….This was a very stressful experience for him and I.
As a baby, Gabrillian was very nervous, irritable.
I first start to breastfeed also he was constantly asking for milk and crying after , we tried with powder milk and he was feeling a little bit more full also he was crying again after. I couldn’t leave him just lying down, he wanted always to be in the arms and he would have made himself vomiting from the distress. In the evening during the night and after even day time he was crying for hours. I was going to different doctors who were not taking me seriously, they were saying that this is just colics… We tried different milk with less lactose, same results…Gabrillian was starting to get very irritable and was even starting to not want so much to eat…I start to look everyday on Google for someone with similar symptoms with solutions which I finally found under the name of GERD (gastro esophageal reflux disease), I packed my suitcase and take flight to France, Gabrillian was only 3 months old…We arrived the night and the day after we were in the hospital “Mere Enfants” In Lyon, he was having an esophagitis ( inflammation of esophagus) due to the reflux..We checked for lactose allergy, with negative results also the allergologist can’t say about intolerances. 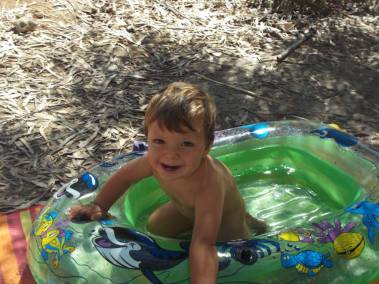 Gaby start to speak early, also he has difficulties to hold his head and taking weird positions to sleep with head at the back. At 1 year and half he was still not walking alone, we could see already many month ago that he was clearly ready to do it . He used to hold the table to walk and would fall often. We brought him to an orthopedist in France who told us not to worry some kids walk after the age of 2.
After few months back in Cyprus, we see another orthopedist which send us directly to a child neurologist, she check Gaby and talk to me about muscle weakness and prescribe physiotherapy and ergo therapy 2 a week and later an EMG( electromyogram). I don’t get alert, I don’t realize that the case of Gaby is important. The EMG give no results, they don’t have experience with children, my ex partner get angry, we stop the procedure and decide to do the exams in France.
Myopathy
I felt during those years a lot of anger and frustrations with doctors in general, in Cyprus, they don’t even speak to me, probably cause they feel uncomfortable to talk English..or they do not explain clearly, using terms that I don’t understand ect..
Finally I got to know that my son has a myopathy which they haven’t diagnosed yet. Gaby did undergo another EMG and some genetic tests , they came back negatif…The MRI of legs shows an amyotrophy on both quadriceps ..They are talking about muscular dystrophy…

I am Clementine Tsvetanov and I am a Neuro Reflex specialist. I work with mothers with MD children who lost muscle strength , vitality and mothers who feel hopeless and I help them to see their children to increase strength , grow muscles and live a healthier and autonomous life! Mothers who have tried many different things and are disappointed about traditional medical care, and are tired of waiting for a cure! What distinguishes my services from other doctors, naturopath, physiotherapists, is that I am myself a mother with MD child who successfully rehabilitated him so I have personal experience in my own life. What else separates me from others is that I have more than 17 years of experience in helping people with severe conditions. I have specialized for MD and I have used different techniques for that condition. Thanks to that, mothers can see their children moving again, growing their muscles , have more energy and live a happy healthy life . View all posts by clementineynna

The Truth about muscular dystrophy

I’m a mother of a one month baby girl and a 5 years old boy with muscle sensitivities and very active , labelled as a child with muscular dystrophy and ADHD…

I’m also a reflexologist, holistic therapist and herbalist with a strong interest for Chinese medicine and Ayurveda…

Here is my humble story of my son and I, the guidelines of a model that works.I wish this blog inspire you as much as I felt empowered and inspired from the discoveries that I made!

Knowledge is power!!!Having all the informations you need for a better understanding will enable you to make informed choices and change the life of your child.